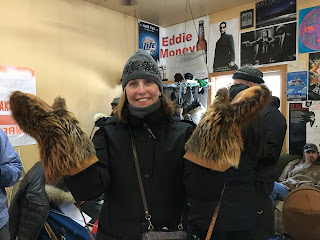 My brain is officially fried.  After about five hours of sleep last night, I was too keyed up to rest well, my word tank is running near empty.  So, I’ll just tell you that the Iditarod Vet Check’s distinguishing feature on our morning field trip was punctuated with blistery cold weather that felt like 11 degrees below zero. The consolation was meeting musher, Jason Mackey, who even without gloves, stopped and talked to me long enough for a picture.


My hands weren’t nearly so hardy, and they lost their feeling every 20 minutes or so depending on how often I retreated to the Iditarod Headquarter building to regain sensation.  When I go out to checkpoints during the official race, I have heavy duty gloves, but didn’t think I needed them today.  That was a mistake. Even hand warmers were inadequate to the task. Lesson learned.

In the afternoon, we headed to Matt Failor’s dog kennel in Willow.  There, he displayed two sleds set up with mandatory gear.  The dog yard had the biggest draw, though, and I found myself roaming freely among its inhabitants. Matt’s an Ohio boy from Mansfield who moved to Alaska to live the mushing lifestyle.  Besides being an excellent musher, his accomplishments include a degree from The Ohio State in photography as well as earning the rank of Eagle Scout. I found some beaver mittens Matt uses during the race – now those would have kept my fingers nice and toasty this morning.

The most interesting thing about the kennel was the way the dogs responded when the sled was prepped for a demo ride.  What was once a relatively quiet dog yard, broke out into near pandemonium when the dogs spotted the sled. The barking cacophony seems to insist at a roaring volume, “pick me, pick me!”  However, when the dogs took off, it was as if someone had turned off a switch. The pulling action of the sled cut the encompassing din into a determined silence as the dogs mushed forward.  The unusual response of the dogs left behind was a combined communal howl that could almost break your heart.  It was if they were saying, “why didn’t you pick me”?

Here are some pictures from the day:

I retired from Lake Center Christian School after serving 19 years as an art teacher. I still love to facilitate the creative energy and talents of students. For the past few years, I've incorporated aspects of the Iditarod into my art curriculum because I love the "Last Great Race".