The Lack of Snow …

After a week of scanning the skies for snowflakes, gauging the veracity of different weather models, and crossing our fingers, the 2017 Birkiebeiner race melted into mud and ice causing the first cancellation of the epic race in ten years.  Normally, vast stretches of the powdery white stuff form at least knee high drifts.  Hayward Lake, the last big approach to the finish line on main street was open water.  Scant precipitation could muster only a dusting of snow.  Instead of a 55 K cross country ski race, thousands experienced a consolation 5K jaunt on their “rock skis” – seems like folks still enjoyed it.

Despite the race cancellation, the atmosphere was surprising upbeat.  Back at our cabin on Lac Courte Oreilles we gathered with Birkie friends around a cozy wood fire and caught up on each other’s latest news, as well as remembered a mutual friend who had died in November.  Each of these folks are dear to me, and I’m grateful that we could spend time together, even if there were no Birkie wax dramas to share.

From Hayward, Wisconsin we travelled to Minneapolis where we fly to Anchorage this evening.  My phone’s been binging with various Anchorage introductions, itineraries and pictures to prepare for our arrival and Iditarod experience.  Like the Birkie ski race, the Iditarod was also impacted by lack of snow this year.  The race was re-routed much further north of the traditional route to Fairbanks.  Several changes have occurred to the list of activities as a result.  Quickly glancing at my most recent notes, I saw we now get to go to two checkpoints with the “Iditarod Air Force” – Nenana and Manly Hot Springs.  I also spotted an opportunity to witness “The Running of the Reindeer” in downtown Anchorage during their winter carnival, “The Fur Rendezvous”, as well as hunt for the Northern Lights with a photographer.

Tomorrow morning, I attend the Iditarod Teacher Conference and meet the finalists for next year’s “Iditarod Teacher on the Trail” as well as take some cool field trips.  I’ll keep you posted. 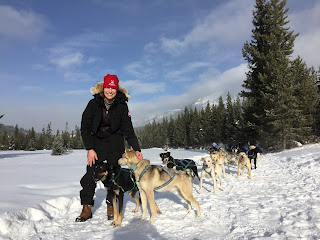 I retired from Lake Center Christian School after serving 19 years as an art teacher. I still love to facilitate the creative energy and talents of students. For the past few years, I've incorporated aspects of the Iditarod into my art curriculum because I love the "Last Great Race".